How Much Lead Time Is Needed To Organise A Webinar?

Ever considered the lead time needed to organise a killer webinar? What tasks need to be done? Precisely how long will they take? Strangely enough, planning a big presentation is very similar to putting on play or a show. Rehearsals, scripts, speakers, they all need to be established beforehand.

However, fail to prepare these things and you’ll have speakers fluffing their lines, people missing their cues and the audience making a swift move for the exits. A tragedy indeed…

On that note, we’ve condensed the preparation time to organise a webinar into three distinct acts that will ensure your audience will be demanding an encore!

Pre warning you from the beginning, the time commitment when co-ordinating a webinar project from start to finish is around 4-6 weeks. This depends on your audience, presentation size and subject of course, but we’ll delve into that later.

Don’t let this seemingly insurmountable task faze you! As the old saying goes; “Rome wasn’t built in a day”. There are several elements to consider before starting, such as people & time management.

First off, draft an Action Plan or Workflow and draw up a Timetable. The Plan/Workflow should outline your ambitions, goals and the tasks to be completed. Consequently, the Timetable should state when you want those assignments to be completed by.

It’s critical you don’t deviate from your plan too much. Doing so could cause unexpected problems with the process and those undertaking the tasks set! Bullet point both of them initially to give team members a flavour of what is expected and expand upon it in more depth later.

Next, assemble the aforementioned team! Which staff members do you have at your disposal? What are their individual strengths and weaknesses? Assign them tasks according to their specialities and it will foster a happy and supportive working environment from the beginning.

People working in their areas of expertise can increase efficiency too, whilst also easing the strain on the team manager (or yourself if you happen to be reading this!). This will allow you to dedicate extra time to other aspects of the webinar.

Give yourself some leeway when it comes to establishing the groundworks of your presentation. Perhaps take a day or two to construct the Action Plan/Timetable. Example; The speaker to be chosen within the first week of the project to give them ample time to prepare their dialogue. 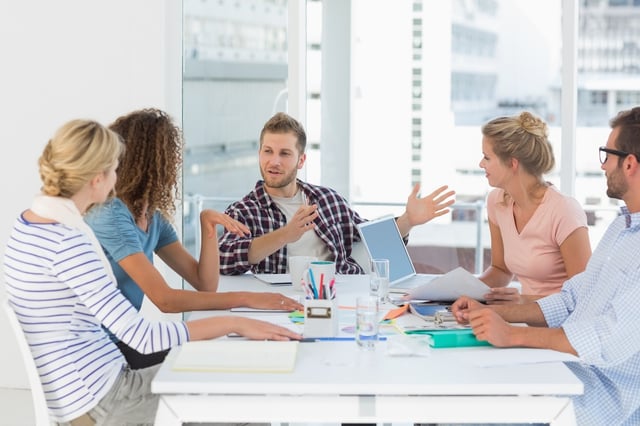 Act Two: The speakers & their subjects...

The greatest show on earth, but no one watching it? Contemplate this for a second, then look at how you’ll generate leads for your webinar. Reaching your audience is relatively easy. Converting them into registrations is another matter entirely. Explaining that could easily take up three acts itself. We’ll attempt to keep it a little shorter!

It’s vitally important that your landing page engages website visitors. Describe clearly what your presentation is all about and emphasise what attendees will gain from watching it! The theory really is as simple as that. Exactly what you include on your landing page is entirely up to you, but it doesn't hurt to brush up on the best ways to entice potential audience members into attending.

Following on from before, you could have a hugely enthusiastic speaker with the most dynamic content, but if the benefits of actually seeing them aren’t communicated, why would people bother tuning in?

How you engage potential viewers is determined by the speaker, subject and tone of your webinar. An example of engaging visitors is to perhaps add a descriptive video to your landing page, giving a little taste of what the audience can expect.

By whetting their appetite, who knows, they may refer your event to others, thus increasing attendance figures!

Whilst embellishing and promoting your online event to the world, consider your capabilities. It could be ultimately fruitless to prepare a speaker, subject and topic for a potential audience you simply can’t reach with the technology at your disposal.

Would cloud-based webinars engage people with more vibrant content? Does the presentation contain sensitive information that requires extra reliability and security? All issues worth pondering.

Analysing what impact your audience has on the topic and vice versa, really speaks for itself. Whether or not the topic reflects the audience you're trying to reach is important to think about, especially when you’re at the lead generation stage.

Granted, your choices may be limited if the subject is very specific, but it’s certainly an issue to reflect upon. You don’t want to lose your audience midway through a presentation!

Some may consider this as adding unnecessary time to the preparation process. However, take a second to imagine the embarrassment if a glaring mistake was spotted by members of your audience?

It’s very common to find mistakes, even after proofing the script and slides. A couple of dummy-runs can help eradicate them, adding to the professionalism of your online event!

The importance of having the speaker take an active role in this particular part of the process cannot be overstated. They’re the person doing the talking and in most cases, they’ll be a specialist in the area being discussed.

Picture the scenario that they spot something wrong with the script on the event eve because they haven’t received the proof in time? Making last minute changes adds unnecessary stress to those involved, so good proofing and an active involvement by the speaker can avert potential disaster!

Have the speaker, a couple of days beforehand if possible, run through the script as they would when presenting. Use this time to polish the script and slides to check if the dialogue flows effortlessly and see if the content is visually engaging!

And finally, test the software!! Think back to how many Skype meetings and conference calls you’ve attended that have been delayed because the LAN cable isn’t working or the phone-line sounds like the caller is stuck in the middle of a blizzard.

Testing the setup you’re working with before the event is essential. Don’t skip this part! It’ll save any unnecessary delays and ensure a dynamite presentation.

Don’t worry, we’re taking the final bow here. Hopefully this blog has given you an improved understanding of the time you’ll need to set aside to organise a stand-out webinar. You can learn more about how to create webinars by downloading our free Webinar Handbook. Aptly, they can be found in the Blog section of our website.

How to Host a Webinar at Home: Everything You Need to Know

What to Buy: Webinar Equipment for Every Budget